Here's a caricature I just finished of fellow caricaturist and buddy Robb Miller: 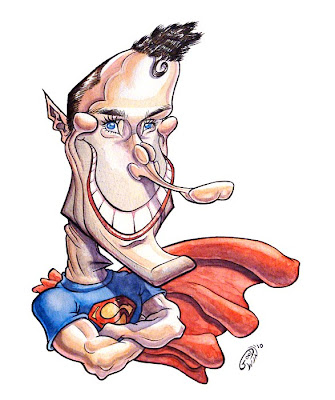 The Superman thing comes from the fact that he was wearing a Superman t-shirt at the convention, he's a martial arts instructor, and he's kinda ripped. So it was the obvious thing to do.

I met Robb at my first caricature convention in November of 2008. He's a really cool, friendly, talented guy, and I ended up doing a rather crappy drawing of him at that first convention. At the second convention, he took a couple photos of me to do a drawing from, but he was apparently unhappy with how it came out, so a few weeks later he did this great digital caricature of me: 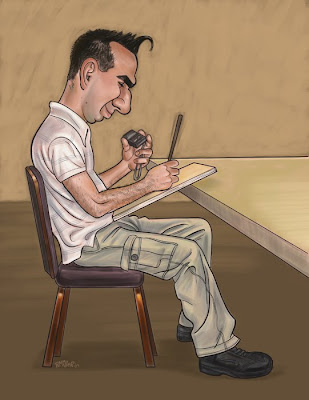 You can check out more of Robb's sweet artwork here:
http://robbmiller.blogspot.com/
Posted by Eric Goodwin at 10:57 AM

Thanks for the nice comments! I really LOVE this caricature! I hope I can go to the next ISCA Con and get the original? It's awesome. The most exaggerated and great likeness I have ever gotten!

That's cool that you like it so much! Sure you wanna wait almost a year to get it when it sounds like you're not even sure you're going? I don't mind mailing it out!