I've done a few craft fairs, expos for hunting and fishing (a bit scary to see who turned up for that one) and motorcycle enthusiasts (got to see some nasty, wrinkly, leather-clad biker chicks), and other random events like a home and garden show that you wouldn't expect to see a caricaturist at. Let's just say that none of them were too successful, but I was able to do a drawing every now and then that I was casually content with, so it wasn't all for practically nothing.

Here's a musician who set up about 20 feet from me and delighted everyone at the home and garden show with non-stop, loud, put-you-to-sleep folk music all 3 days of the show. When I brought in my ipod and some portable speakers on the second day and played music (at less than one-quarter of the volume of his) that would actually give me energy to stay awake and be able to draw, he "told on me" to the organizer of the event that I needed to turn my music down so that he could concentrate on his. I was amazed that he could even hear my music when he wasn't even playing, but I was even more amazed that a 50-something-year-old man couldn't bring himself to walk over and ask me politely to lower my music himself. I'm pretty sure he was getting his revenge on me for my staring at him while I drew him the previous day. Hey, better than a punch!: 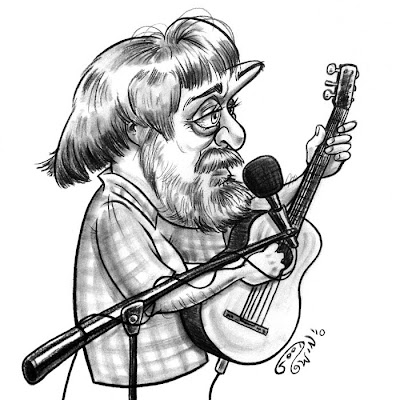 And here's a drawing of the guy who was set up to my left. He claimed to be the inventor of "dessert hummus" and was letting people try free samples of it. He had a large stuffed animal camel on his table to lure people over, so most people saw that thing and totally overlooked my caricature display, which is tough to miss. I kid you not, a woman who was extra enthusiastic about the camel asked me, "Did you see the camel?!" as if I hadn't noticed everyone that passed by it for the previous few hours commenting on it. Best investment for his business he ever made, he said. Here he is (the guy, not the camel): 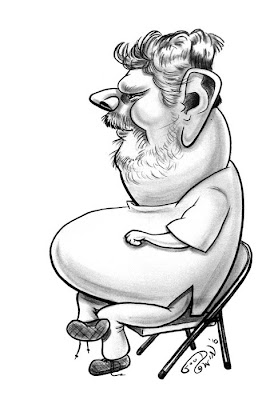 And here are some live drawings that people paid for (as opposed to drawings I did of people indiscreetly while ogling them from afar): 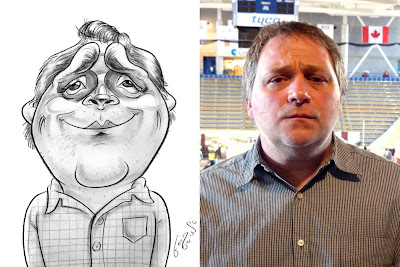 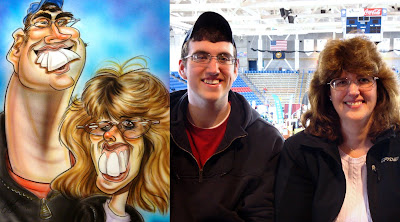 A Look of Familiarity
If this guy looks strangely familiar to you but you can't quite put your bony finger on it, I'll tell you why, my questioning quails, my wondering whippoorwills. It's my papa! Turns out my dad was helping out with the Parenting Magazine booth at the home and garden show I was at, as he art directs a lot of goodness at that magazine's headquarters, McLean Communications. So he stopped by for a visit, and in a successful attempt to lure in customers, I drew my dad for the first time in probably 2 years. Wow! So many beautiful imperfections that I hadn't noticed before, even from seeing him almost daily in a casually-looking-at-him-kind-of-way. I wasn't able to grab a photo of him then and there, but I found a photo from a couple years ago, so that's why the shirt doesn't match: 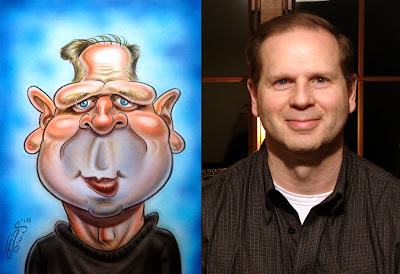 Wide-Eyed Grimace
As I got close to completing this drawing, I got a chance to actually look at it as a whole for the first time and got that pang in my stomach that's a fun mixture of guilt, surprise, exhilaration, laughter, nervousness and anticipation that you can sometimes get when you realize that you exaggerated a bit more than you maybe intended or when you think the result is potentially going to get a mixed or negative reaction from the person you're drawing. Luckily for both of us, she loved it and was impressed with the detail so much so that she sang my praises when the next person sat down. I must admit, she has a good sense of humor to like this one: 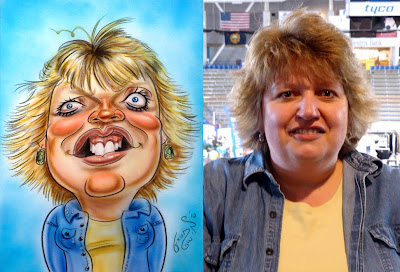 Square Jaw and Willow Tree
These guys were a lot of fun to draw and talk to, the perfect combination: 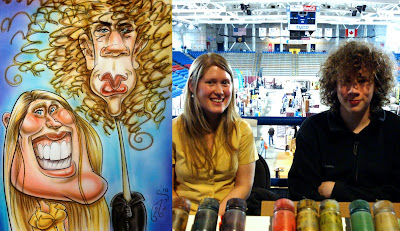 Freckled Teeth Freak
This was good therapy (for me): 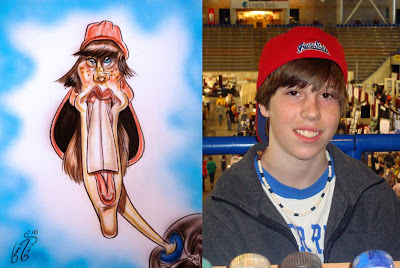 Notice how he didn't smile with his teeth AFTER he saw the drawing? Better than the other way around though. 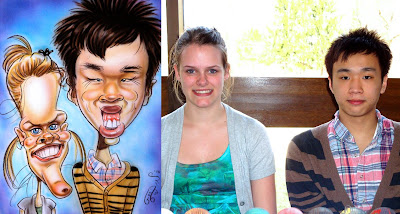 Wish I'd made her cheeks pink instead of red. 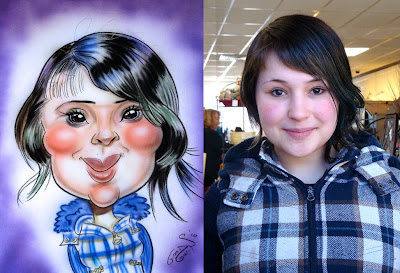 Lonely Cowboy
This guy was set up at the motorcycle expo with his "artwork." Turns out he's been working on 1 (count 'em: one) woodblock carving of a couple riding on a motorcycle FOR THE PAST 15 YEARS! Apparently he only works on it during motorcycle expos, which means that he pays about $300 each time to work for a couple hours on that carving! He didn't have much skill at it, but he probably liked getting a reaction from people when working live. I think I know where he's coming from, now that I think about it... 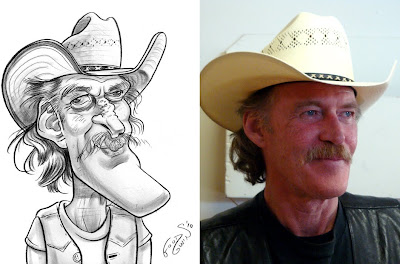 Bottom-Lip-Biter
I just kinda gave up after awhile on that sweatshirt design. I think I realized, after it was too late, that it wasn't just an abstract design but actually a dragon. Haha whoops! 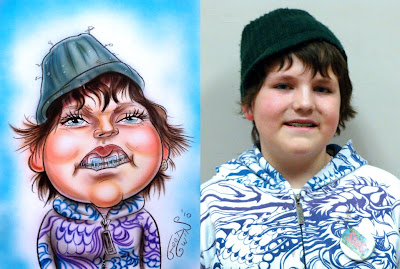 Gummy Braces
A really cool kid with an awesome smile. 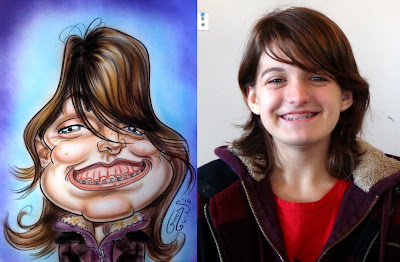 cant wait to work with you, got yo drawiing hanging on my wall. dude you gotta come by my place and have a drawing session, please draw us.

Thanks Damion! Means a lot.

Andy, you have no idea how excited I am to move out there and work with you guys! I'll definitely take you up on your offer, and I'm hoping to find a place to live close to the park that will be great for having you guys come over and hang out if you want too!

sounds good, when exactly you coming down?

I should be getting there by mid-May as far as I can predict now. It'll take about a week for me to drive out there. Should be quite the trip!

I love how you did the back of the folk singer's hair!

Aaron, weirdly enough that was my favorite part of the folk singer drawing too haha

These are so great! Way to go with all those gigs--getting your name out there...

You're going to be a Beasthead!!

Thanks, Francesca! The gigs weren't all so great, but having a bit of cash and some new photos for the blog made them worthwhile for sure. And yeah, I know!