I know, I know, it's been a while since I've posted, especially since for a couple months I was actually posting a couple times a week. I've been pretty busy. A week or two ago I got hired to draw caricatures for Kaman's Art Shoppes at SeaWorld, San Diego! I'll be starting sometime probably in mid-May.

I had been considering my options for the summer for a few months, and after getting turned down for my private caricature stand proposal by my local amusement park, Canobie Lake, and not necessarily wanting to return to Six Flags, New England for a 4th season with so few friends returning, I imagined the impossibly ideal: drawing in San Diego with the Beastheads: Brian Oakes, Nate Kapnicky, Andy Urzua, Beau Hufford, Aaron Philby, Francesca Nunez and more whose work I have yet to be graced with. If you haven't already checked out their blog (or even if you have, check it out again), bask in the amazingness:
http://www.beastheads.blogspot.com/

Of course, living here currently in New Hampshire made this idea seem like quite a leap of faith (and a leap of location), and that was besides the fact that I wasn't sure whether I would even make it past the interview and be considered for the job, provided that Kaman's was even looking for new hires in the first place.

Aaron recommended I speak to Brian, and a week or so later after a few email exchanges I was talking live via Skype video chat to Brian and Beau who were 3 hours behind my time over there in San Diego. Ever since hearing back from Brian a few days later with the go-ahead, I've been so excited about moving out there and working with those guys that I've actually been having trouble sleeping.

I've started to put in some practice time into using the markettes and art stix they use, which are really quite different from pencil and airbrush (as I'm sure you can imagine), as I'm accustomed to using. If you can't imagine it, or you simply prefer differences being presented as useless and rather stupid mathemillumustrations, then feast your eyes: 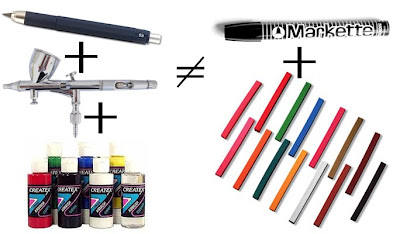 I'll be spending the next few weeks putting more practice into that and into getting used to drawing cartoon bodies, the classic SeaWorld animals (sharks, dolphins and whales) and the less popular animals (walruses, turtles, seals, polar bears, fish, etc.). I know I'll get used to drawing those animals pretty quickly once I get out there, but I'd like to be at least a little prepared for the job as well. We didn't draw too many themes or backgrounds at Six Flags, but that kind of stuff is their specialty (along with the obligatory beasting of innocent faces), so I'm eager for the challenge now that I'm a bit more comfortable with drawing caricatures in general. Three years of practice will do that for ya.

Alright, enough blogging; back to practicing!
Posted by Eric Goodwin at 7:32 PM

Thats awesome. Working next a really good artist can really help bring ones A game. Cant wait to see some of your new stuff. Best of luck!

Yeah, can't wait to get out there! I'll be sure to post some SeaWorld drawings as soon as they start to not suck haha.

derek would know, he works with all those cool japanese court jones guys. hey derek

yeah, I was just checking out the great new Tomo painting of him he posted the other day