Here's a few pieces of art from this year's Cripple Con, a caricature convention dedicated to the somewhat recently crippled Len Hernandez. 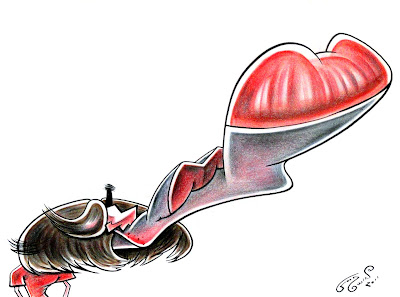 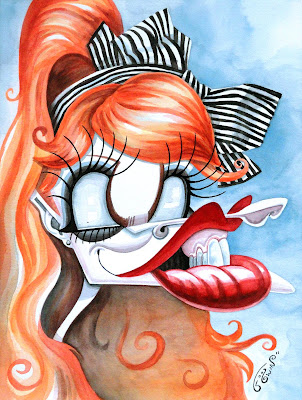 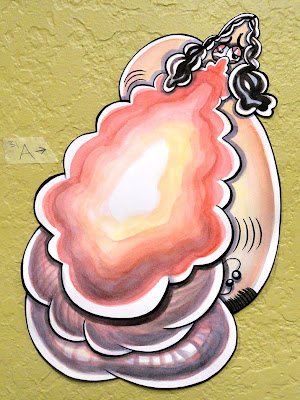 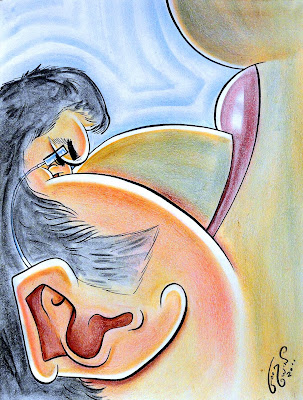 Here's my family unwrapping and seeing their drawings for the first time on Christmas. Fun!

I did these drawings as gifts to my family for Christmas. They knew I was working on drawings of them but had no idea what the drawings looked like till they unwrapped them for Christmas. 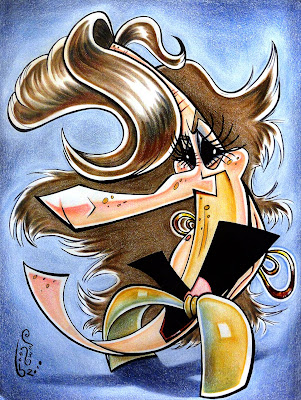 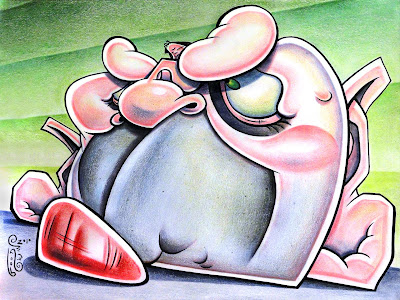 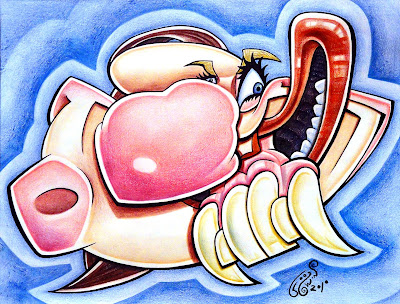 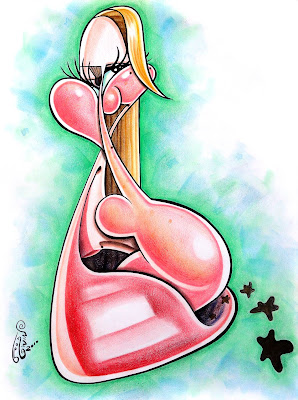 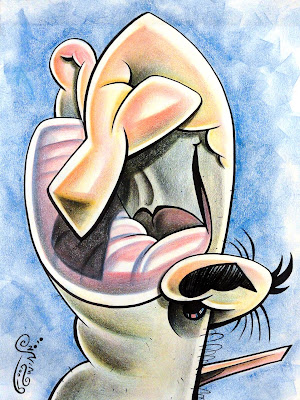 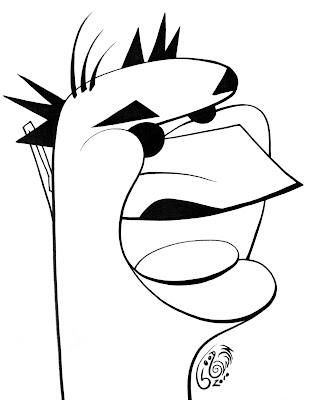 Here's my wall of art from the convention! 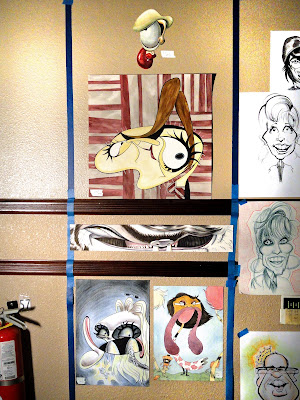 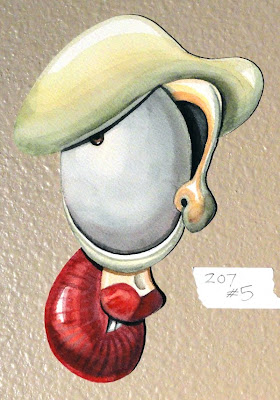 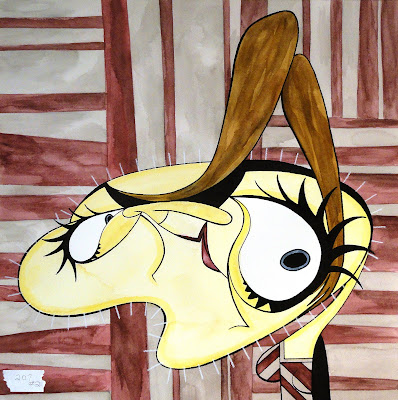 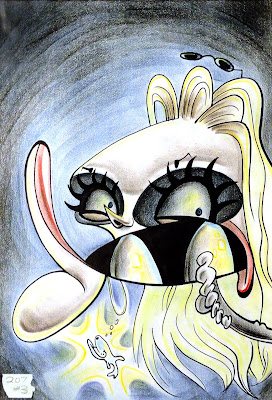 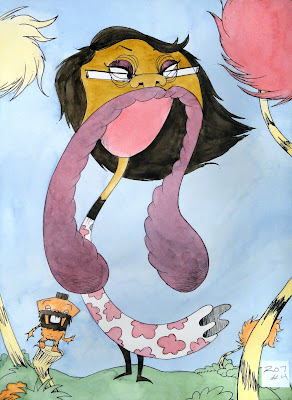 Posted by Eric Goodwin at 5:13 PM No comments:

a couple caricature paintings of friends

Here's David Patel, a cool caricaturist who worked at the San Diego Zoo last summer that I painted a few months ago. 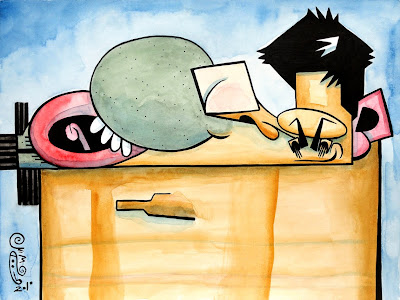 Here's Trevor LaFauci, a cool guy who moved out to San Diego from my home town of Londonderry, New Hampshire shortly before I did. 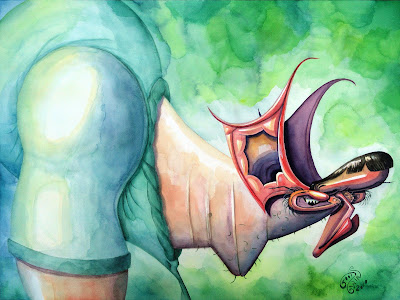 Posted by Eric Goodwin at 3:15 PM No comments:


Sure, you could call them impressions, but I like to think of these clips of me "singing" as auditory caricatures since I tried to push the sound beyond what the singers actually sing like. Plus, I'm not the world's greatest singer, so these are meant to be funny and entertaining rather than serious and well sung (which isn't to say that I'm not singing to the best of my ability haha). I tried to pick sections of songs that epitomize the sound of the singer while trying to capture a lot of the distinguishing, unique sound qualities you'd hear throughout their music that make that singer's voice stand out from everyone else's.

A lot of these voices I've been doing for a while, ranging from a few months to many years, just for fun in the car, shower or whatever, but I've never really tried to exaggerate them quite so much as now. What I found is that this right here is the most like the singers that I've ever sounded before. I thought that by pushing these impressions beyond what I think the singers sound like that I might start to lose the auditory "likeness," but the opposite was true. A good impression is a lot like a good caricature drawing or painting: it can capture the overall essence of the subject matter a lot more effectively and creatively than a "portrait" or simple imitation ever could. And based on the subject, like with a drawn caricature, some impressions naturally become more exaggerated or seem more exaggerated than others.

There are some noticeable omissions in this video, of course, such as the Misfits, Bad Religion, Minor Threat, the Offspring and many others, but this was more about organizing some of the singers I can sound like in the punk and pop/punk genre into one video rather than being about giving a thorough music history lesson. I didn't try to physically move like the singers but sometimes sang in a way that the impression dictated to me and in a way that helped me "sing" the part. This is almost more like a visual behind-the-scenes look at me finally capturing my best try at an auditory likeness. In that aspect, it might actually sound more like the singers I'm caricaturing if you don't even watch the video, but this will at least give you something to distract your eyes while you listen. Plus, it's kind of visual proof that it's me doing the singing if you're the skeptical type. After recording these clips in a random order I put them in the order in which the songs were released, starting with the earliest, , which explains the differences in lighting and placement. Yep, this took a while (about 14 hours of trial-and-error singing over 2 days).

Oh, and I had to use my computer's not-so-great built-in microphone, which is why I'm sitting awkwardly on my bed a few feet away to avoid too much distortion. I added captions so that if you haven't heard these bands before, you can look the songs up on youtube or iTunes or whatever. Try not to be too intimidated by the nearly 5-minute length of this video, as there are actually a whopping 17 auditory caricatures in it. Wow, 17?! Really? Yep. But if you're patient enough to read this, you should have no trouble watching the video.
Enjoy!

P.S. Yeah, I know that even after all this smart talk the fact of the matter is that I'm just a big dork :)
Posted by Eric Goodwin at 5:01 AM No comments: 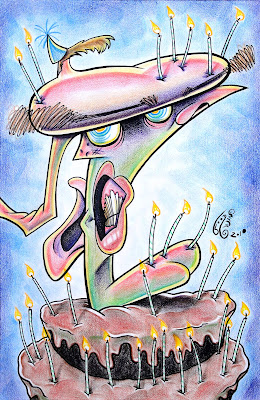 Posted by Eric Goodwin at 4:58 AM No comments:

These are watercolor paintings done of contributors for an upcoming political website. They will basically be used as icons next to their name to accompany any article they write. 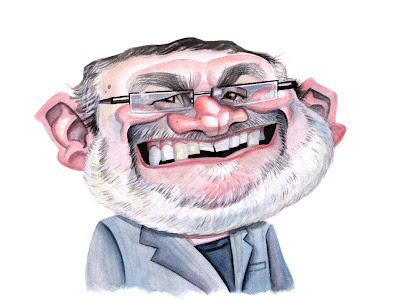 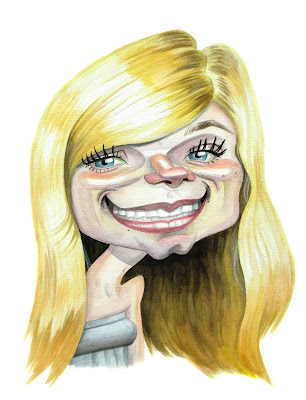 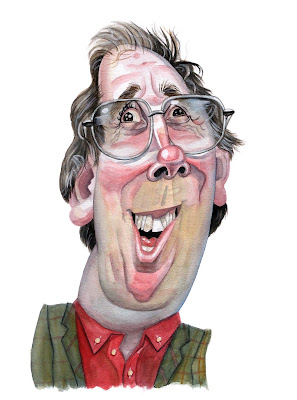 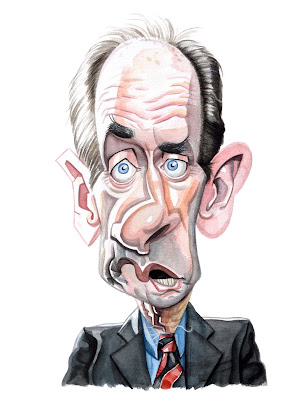 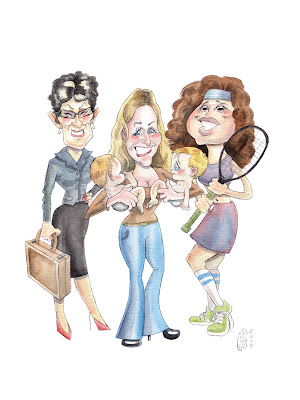 Here's an ok illustration I did for a medical-type editorial article for a magazine based out of New Hampshire. Turns out they didn't want to use something this caricature-esque or illustration-y and went with a boring photo collage instead. Oh well, I got paid, and the company that hired me to do this job for the magazine liked it. It's pen and watercolor on watercolor paper.
Posted by Eric Goodwin at 5:25 PM No comments: 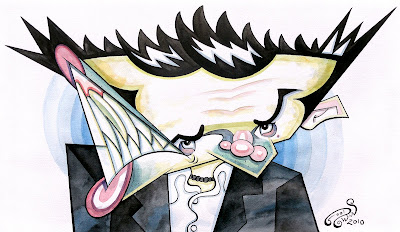 Here's another Caricaturama Showdown 3000 entry. I was trying to do some interesting stuff with straight lines versus curved lines, so I ended up using a ruler for about half of the lines in this with no parallel lines. The likeness is iffy, but I like the design-i-ness and the colors at least.
Posted by Eric Goodwin at 5:07 PM 3 comments: 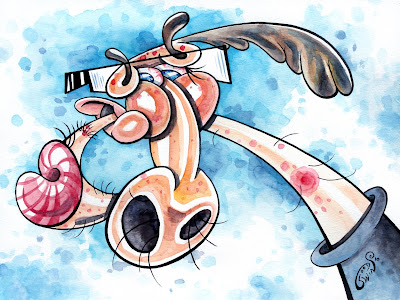 I just realized that I forgot to post this when I shoulda a few weeks ago. I did this after the painting of Dhaveed and right before the Seinfeld painting. It's of the amazing Brian Oakes and was done with Markettes and watercolor on watercolor paper. Had fun with this one! Check out Oakes' blog here:
http://brianoakes.blogspot.com/
Posted by Eric Goodwin at 4:57 PM No comments: 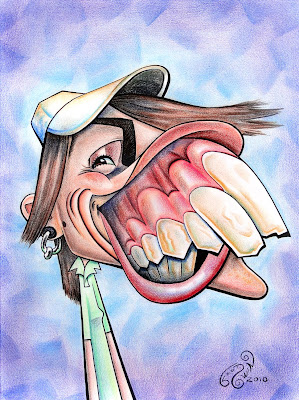 Here's Devon Browning, a cool letterbrush artist who works at SeaWorld. Check out some of her awesome paintings:
http://www.devonbrowning.com/
Posted by Eric Goodwin at 9:14 AM 2 comments: 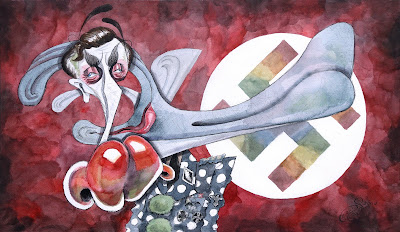 Here's another entry for the Caricaturama Showdown, this time for Inglorious Basterds. I had been working on this the night before it was due and decided to give up on it as it was only halfway done and I was undecided about how I felt about it. Well, I'm glad I finished it even though it's too late to submit it for competition.

Christoph Waltz was awesome in this role as the Jew Hunter, and he had this creepy way of being evil while smiling and sounding friendly, a bit like an evil clown.

I used a uni Super Ink pen with watercolor on Arches watercolor paper. 14" x 24"
Posted by Eric Goodwin at 3:17 PM No comments:

Here's my second entry for Caricaturama Showdown. Being the winner from last week, I was able to choose whoever I wanted, and there were a lot of really great entries this week.
Michael Cera's such a wimpy-looking guy, so here he is as Scott Pilgrim in a fighting pose made even wimpier by the fact that he's fighting for love. The hearts are from a kissing scene with Ramona Flowers in the movie. His hair reminds me of a tree or shrub, so I went with kinda earthy tones for that. Markettes and watercolor on watercolor paper.
Posted by Eric Goodwin at 2:36 AM 2 comments: